The Livingston Players is fully affiliated to The National Operatic and Dramatic Association and The Scottish Community Drama Association.

We perform three productions each year. One is a musical generally performed in the last week in May, and the other two are plays produced in January and October. We perform our shows in the refurbished Brian Duguid Auditorium at Howden Park Centre.

which will be Directed by John Hutchinson
with choreography by Pam Murray. 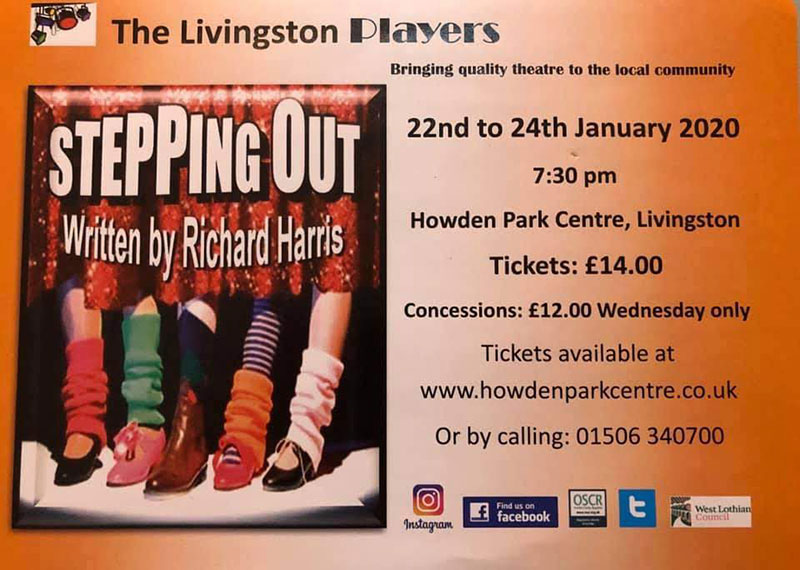 First performed in the West End in 1984, “Stepping Out” was successfully revived in 2017. Described as a funny and heart-warming comedy, it follows the lives of seven women and one man who meet at a weekly dance class to tap their troubles away. Led by the patient ex-professional Mavis, the group begin their journey with two left feet. But will they exceed all expectations when they are asked to perform in a public charity gala?

Following our well attended auditions we are pleased to announce that the cast will be as follows:-

Tickets are now on sale

Click on “Tickets” above to go to the Box Office.
MORE INFORMATION

Click on the above to enter
Noda or SCDA Websites

What’s new with The Livingston Players?
See our
Facebook Page

Purchase tickets for the next Livingston Payers Production. You can find all the booking information on how to buy tickets by phone, email, or directly on line by clicking on the above “Tickets” link.

Want to become a member?

We are always on the look out for new members, both on and off stage and you will be made most welcome. For more information on becoming a member of The Livingston Players, call

We use cookies to ensure that we give you the best experience on our website. If you continue to use this site we will assume that you are happy with it.OkPrivacy and cookie policy